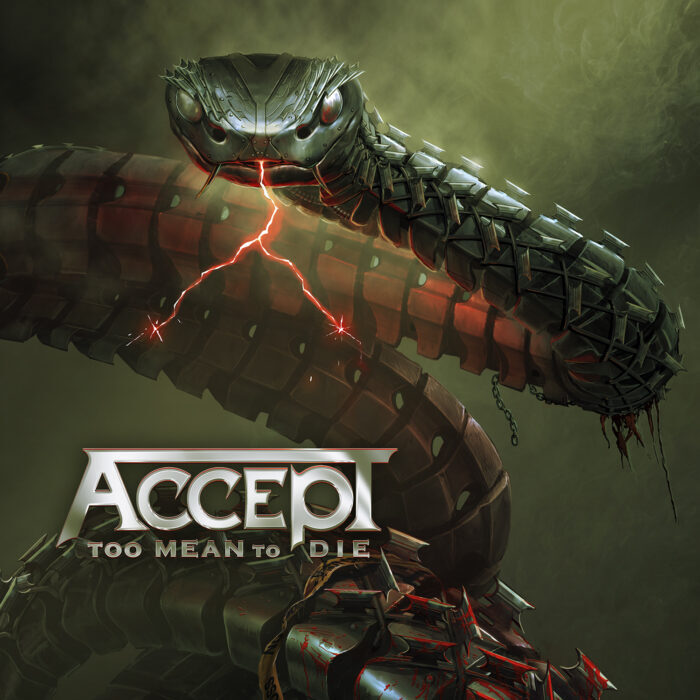 The new masterpiece from the metal legends

FINALLY! After an enforced production break in spring 2020 and a recent virus-related postponement of the release recently, the time has come: ACCEPT, the German masters of heavy metal are releasing their new, eagerly awaited 16th studio album today, on 29 January 2021 via Nuclear Blast. The masterpiece’s ingenious title is “Too Mean To Die”.

US vocalist Mark Tornillo, who put his incomparable stamp on the album explains: “After the cruel year 2020 for all of us worldwide, we are happy that we can present our new album to the fans. We are very excited about the reactions. And we’re looking forward to hopefully being on stage in front of you again soon and looking into your beaming faces as we rock out together with you. No question: The Best Is Yet To Come.”

True to the motto of the beguiling new album ballad ‘The Best Is Yet To Come’,Tornillo is at his best. The metal world knows that Markcan scream like no other, but here it’s impressively shown that the frontman can also sing magnificently. “Mark sang this song, which is rather unusual for us, stunningly well. The fantastic thing about Mark is that he not only masters the typical metal screams, but can also sing melodically and beautifully. He proves this in this song,” enthuses chief guitarist Hoffmann.

The recordings were made in Nashville (USA), produced by the British master producerAndy Sneap (JUDAS PRIEST, MEGADETH, among others), who once again (as always since 2010) provided the brilliant ACCEPTmix.

Philip Shouse (GENE SIMMONS BAND etc.) is a new member and can be heard for the first time on an ACCEPTalbum. The US guitarist fights hot duels with Hoffmann, whileUwe Lulis perfects the guitar trio and provides solid rhythm. “Phil was part of our orchestra project and was also completely convincing live. We recognised his great talent immediately and simply wouldn’t let him go,” explains Hoffmann.

The three pre-release singles ‘The Undertaker’, ‘Too Mean To Die’ and ‘Zombie Apocalypse’ showed how varied the ACCEPTguitar army is on the new album. The con-genial duo Hoffmannand Tornillowere responsible for the songwriting of the album and have reached a new peak of creativity with “Too Mean To Die”.

In addition, ACCEPTadded the very strong Martin Motnikon bass, who according to Wolf Hoffmann, “immediately contributed some good song ideas of his own“. Together with Christopher Williams, the “powerhouse” on drums, Motnik provides the foundation forACCEPT‘s unmistakable sound.

With “Too Mean To Die” ACCEPTare once again playing in the Champions League of the genre. Wolf Hoffmann & Co. are presenting the (music) world with eleven new masterpieces – eleven songs for eternity!

Wolf Hoffmannsays: “We are too mean to die! Weeds do not die! ACCEPT won’t let it get us down!”

Most of the limited vinyl formats of the album “Too Mean To Die” are already or nearly sold out incl. the recently announced white 2-LP vinyl edition done in cooperation with ACCEPT‘s partner Spotify.

Order your copy here: http://nblast.de/Accept-TooMeanToDie
Plus you still have a chance to win the album here: www.accepttoomeantodie.com